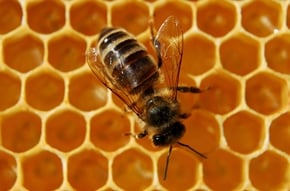 Bee expert May Berendaum at the University of Illinois blames the population decline on a variety of factories calling it “a complicated puzzle that includes a lack of food for bees, parasites, diseases and the way different pesticides and fungicides interact.”

The EPA, in partnership with California’s environmental agency “found a clear level of concentration of the pesticide imidaclorprid.” Nectar that came back to the hive with more than 25 parts per billion of the chemical resulted in fewer bees, less honey and a less robust hive. The impact of the pesticide depended on the type of crop. Cotton and citrus fruits had harmful levels, while corn, berries and tobacco did not.

Nature reported in April 2015 “neonicotinoids have a ‘dramatic’ impact on populations of bumble bees and other wild bees, including when they are applied through seed coating.” An additional study in the UK “provided the first large-scale field evidence that honeybees could also be affected by poisoned nectar carried to the hive from oilseed rape fields.”

The EPA stated in a press release, “In 2015, EPA proposed to prohibit the use of pesticides that are toxic to bees, including the neonicotinoids, when crops are in bloom and bees are under contract for pollination services. The Agency temporarily halted the approval of new outdoor neonicotinoid pesticide uses until new bee data is submitted and pollinator risk assessments are complete.”

The EPA intends to use the four risk assessments as the foundation for any further actions on pesticides, in addition to taking comments from the public.