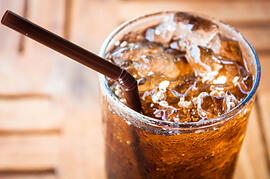 If you were watching the news in the 1990s you may remember the “benzene soda scare”. Bad news was on the doorstep.  Benzene had been discovered in Perrier, and worse, in our beloved soft drinks.  What came to light was that our fizzing water of life was found to contain a dangerous substance.  And not just any substance, but one linked to cancer.

It was one of the first large public criticisms of soft drinks as unhealthy and some might even say “life threatening”, plus it was backed by FDA validated evidence.  Prior to this, soft drink's only “real” enemy might be your mother who swore it would “rot your teeth out”.  Perhaps because soft drinks play such a prominent role in the modern diet, as well as being a frequent and easy target of unhealthy eating and lifestyle, benzene in soft drinks resulted in a storm of news and an drew an enormous public response.

Benzene is a clear, highly flammable, colorless aromatic liquid that occurs in the environment from both natural and manmade sources including cigarette smoke, automobile emissions, and the burning of coal and oil.  Benzene is frequently used in the manufacture of chemicals, dyes, detergents, and is most frequently used as a building block for making plastics, rubber, resins and synthetic fabrics like nylon and polyester.  Benzene also has other uses as a solvent in printing, paints, and dry cleaning.1, 2

The US Environmental Protection Agency (EPA) has established a maximum contaminant level (MCL) for benzene in drinking water of 5 Parts Per Billion (ppb).  The FDA has adopted the EPA’s MCL for drinking water as an allowable level for bottled water.2 Benzene in soft drinks and other beverages is informally regulated, but is expected to not exceed the drinking water standard.4

How Does it Effect Your Health?

Benzene is a carcinogen that can cause cancer in humans, and has caused cancer in workers exposed to high levels from workplace air.2  The US EPA states, “Some people who drink water containing benzene well in excess of the Maximum Contaminant Level (MCL) for many years could experience anemia or a decrease in blood platelets, and may have an increased risk of getting cancer.”1

How did it get in Your Water?

Primary sources of benzene in drinking water are from discharge from factories; and leaching from gas storage tanks and landfills.1

How did it get in Your Soft Drink?

The presence of Benzene in beverages was discovered in 1990 when a lab using Perrier for their standard preparation, detected levels of benzene in what they assumed was a highly pure form of water.3  Consequently, the FDA tested and confirmed the presence of benzene in soft drinks, large quantities of beverages were recalled, and the topic has been a heated, ongoing public debate ever since.4

Due to the FAA findings, beverage manufacturers and beverage associations worked to calm public fears by reformulating their drinks and determine the reason for the benzene’s existence.

Eventually it was found that benzene was produced in soft drinks when benzoic acid (a preservative in the forms of its salts sodium benzoate, potassium benzoate, or calcium benzoate), in the presence of ascorbic acid or erythorbic acid (vitamin C is added for health, flavor and for marketability5) was exposed to heat and light.  The benzoate was found to be the contributor of benzene to this process.  As a solution, many beverage manufacturers reformulated their product, phasing out one of the contributing factors.4

This proved to only be a temporary fix when in 2005, an independent lab tested beverages from store shelves and once again found a small percentage to have levels of benzene greater than the 5 ppb drinking water limit.  This prompted the FDA to reopen testing, and eventually issue a report in 2006:

The report found benzene levels above the 5 ppb drinking water standard in four beverage products out of 100.6  Additionally, the report included data from different lots of the same beverage and concluded that levels of benzene could vary widely.6

Of Monitoring and Risk

The takeaway is that monitoring for benzene is a part of our lives, and something that requires constant and continual vigilance.  Without a doubt, being aware of what is in our foods, beverages, and environment makes simple sense.  Surprisingly, despite the commotion over benzene’s presence in beverages and soft drinks, the risks of it causing cancer are relatively low, although it may still “rot your teeth out”.  On the other hand, a bit more troubling is that there other forms of exposure that carry significantly higher levels of benzene than soft drinks including the air we breathe, automobile related activities, and inhalation of cigarette smoke (both directly and indirectly).4

The UK Food Standards Agency has stated that people would need to drink at least 20 liters (5.5 gal) per day of a drink containing benzene at 10 μg to equal the amount of benzene they would breathe from city air every day.7 Not many of us will be indulging in that many sodas!

The monitoring of the food and beverages we consume is an important precautionary requirement in our world of chemical complexity.  If you would like to look further into the technical analysis of benzene, refer to our Benzene Analysis resources by clicking the button below.