Mmmm… Bacon! The VOCs that make Bacon Smell So Good

The UK-based Chemistry teacher behind Compound Interest, a blog that takes a closer look at the chemical compounds we come across every day, asked the question “Why does bacon smell so good?” He came across a study that “tried to discover the compounds that give frying bacon its aroma, by comparing it with the aromas released when cooking pork loin. They did this by frying the meat, mincing it, then passing nitrogen gas over it to collect any volatile organic compounds that were being released. The collected volatile compounds were then passed through a gas chromatograph and mass spectrometer in order for identification to be carried out.”

Compound Interest summarized the results of the pork study in the form of an infographic (see below), and then American Chemical Society put together a short video describing the volume of volatile organic compounds (VOCs) that are released as bacon is cooked. According to the analysis, approximately 150 VOCs were detected in the aroma of bacon. These included hydrocarbons, alcohols, ketones and aldehydes, as well as nitrogen containing compounds exclusive to bacon, 2,5-dimethylpyrazine, 2,3-dimethylpyrazine, 2-ethyl-5-methylpyrazine and 2-ethyl-3,5-dimethylpyrazine. Researchers agreed that it’s likely the combination of all of these compounds that drive people to the kitchen. 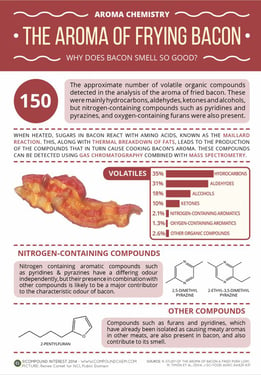 Video: Describing the volume of VOCs released as bacon is cooked

Teledyne Tekmar's Headspace instruments are used to determine VOCs in food, packaging and other applications.  To see a list and download a relevant application - visit our application note page.