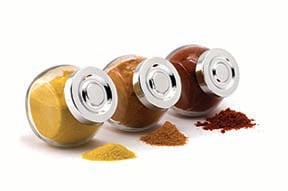 The Sudan dyes are part of the compound group named Azo-dyes, which have been listed by the International Agency for Research on Cancer as a carcinogen. The European Union and the United States have banned the use of these dyes in foods and spices.

Teledyne Tekemar recently put its automated QuEChERS extraction method to the test using its AutoMate-Q40 to determine levels of Sudan dyes in food. Researchers used liquid chromatography coupled with triple-quadruple mass spectrometry to detect Sudan dyes in agricultural commodities. The quantification was based on matrix-matched calibration curves for each commodity. The automated extraction streamlines the QuEChERS Method while providing suitable analytical results falling in the method for all target compounds.

The sample was prepared by depositing two grams of the organic chili powder into a 50 mL centrifuge tube, which was placed inside the AutoMate-Q40. The AutoMate-Q40 added 10 mL of both water and 1% HOAc in Acetonitrile to the sample, which was then vortexed for 30 seconds. Once the vortex was complete the unit added the Tek-Q AOAC QuEChERS Salts. The sample was shaken for 1 minute, and then placed into the centrifuge for 1 minute. The AutoMate-Q40 removed a 6 mL aliquot from the liquid solid extraction and transferred it into the Tek-Q dSPE tube (900 mg MgSO4 and 150 mg PSA). The dSPE was shaken and centrifuged for 1 minute each. The Automate-Q40 then removed 4 mL from the dSPE tube and placed the aliquot into the final extract tube.

For details about the instrumentation and analytical conditions, as well as the study results, download the Application Note