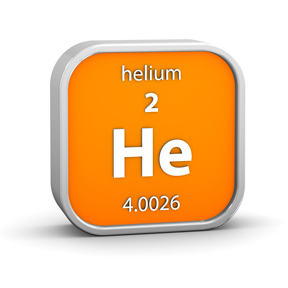 In September, we hosted a webinar about using alternative gases for volatile organic compound (VOC) analysis. Helium is by far the choice carrier gas and is used for many purposes besides VOC analysis. Unfortunately, the price for helium has increased and shortages are being reported worldwide, this in spite of the fact that helium is the second most abundant element in the universe[1]. Since 2008, the price of helium has increased by a factor of 2.5 every year, and one scientist estimates that a party balloon could cost as much as $100 in the near future. Helium is used as a cooling source for semiconductor magnets, in MRI scanners, fiber optics and LCDs, for industrial leak detection and to make breathing easier for deep-sea divers.

“The only way to obtain more helium -- actually a specific isotope used in science experiments and security equipment, called helium-3 -- would be to capture it from the decay of tritium, which is a radioactive hydrogen isotope. But the U.S. stopped making tritium in 1988.

“Our current supplies come from radioactive alpha decay in rocks, according to [Cornell Scientist] Robert Richardson. If we run out completely, we will have to recover helium from the air, making it cost 10,000 times what it does today.”

The rising costs of Helium have also provoked interest in finding a viable alternative purge gas. Over time, we have validated Nitrogen as an effective alternative to helium. Our Atomx Vial Autosampler was developed to fully automate water, soil, and methanol extraction in accordance with the USEPA methods for volatile analyses. One of the beneficial features of the Atomx is that it comes with an electronic mass flow controller that is calibrated for either Nitrogen or Helium. The mass flow controller is electronic, which means flow rates can be calibrated in the software. This is a patented feature that allows users to switch gases by simply changing the configuration rather than having to manually adjust pressures and flows with traditional systems.

Tests performed with the Atomx instrument have found that nitrogen is a viable alternative to helium, and can save companies considerable costs in the long-term.