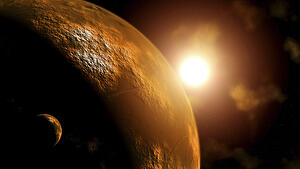 Is life on Mars possible… an age-old question that has yet to be completely answered? While current conditions indicate that the planet is inhospitable to life, scientists are now finding evidence that the planet once had a climate where life was possible. NASA Curiosity rover detected organic molecules as part of recent landing mission, but scientists are uncertain whether the molecules are the building blocks of life or created by a chemical reaction from water at ancient Martian hot springs or interplanetary dust from asteroids or comets.

Nearly 40 years after NASA’s Viking landers took the first Gas Chromatograph Mass Spectrometer to Mars, NASA sent the Curiosity rover in 2011 to learn more about the Martian environment. The team responsible for the Sample Analysis at Mars (SAM) instruments dropped the rover in Gale crater, which is believed to be the site of a lake billions of years ago. The rover took organic molecules from drilled samples taken from mudstone at the landing site, discovering that an ancient environment that included water and chemical elements and a chemical energy source.

Scientists discovered that the “mudstone was found to contain 20 percent smectite clays. On Earth, such clays are known to provide high surface area and optimal interlayer sites for the concentration and preservation of organic compounds when rapidly deposited under reducing chemical conditions.”[i]

Among the other interesting organic molecules found in the sample are chlorobenzene and several dichloroalkanes, including dichloroethane, dichloropropane and dichlorobutane. On earth, Chlorobenzene is not a naturally occurring compound; rather it is used in manufacturing pesticides, herbicides, adhesives, paints and rubber.  Dichloroethane is an industrial solvent in paint thinners, varnishes and finish removers. It is also a carcinogen. How these molecules got to Mars is still uncertain with speculation that some of them came from the instruments used to gather the samples.

The process for gathering the samples was described in an article on NASA.gov[ii]:

“SAM detected the compounds using its Evolved Gas Analysis (EGA) mode by heating the sample up to about 875 degrees Celsius (around 1,600 degrees Fahrenheit) and then monitoring the volatiles released from the sample using a quadrupole mass spectrometer, which identifies molecules by their mass using electric fields. SAM also detected and identified the compounds using its Gas Chromatograph Mass Spectrometer (GCMS) mode. In this mode, volatiles are separated by the amount of time they take to travel through a narrow tube (gas chromatography -- certain molecules interact with the sides of the tube more readily and thus travel more slowly) and then identified by their signature mass fragments in the mass spectrometer.”

Click to watch a video by NASA about the samples from Mars www.youtube.com/embed/UN0Zj4SIz1A

According to NASA scientist, the only way to validate the findings is to continue to gather more samples from rocks on other parts of Mars. A complete explanation of the first detection of organic molecules at Mars and a picture of the instruments used is available online at NASA.gov.