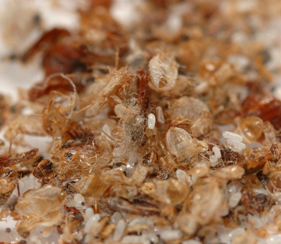 Artists use eggs, glue and vegetable oils in their paints. Bed Bugs have three volatile compounds in their feces that have been combined to create a lure that makes them easier to catch; two completely different topics, and not exactly things that you read every day. They are however important to art conservationists and scientists, and we wouldn’t know about either if it weren’t for modern analytical techniques, including gas chromatography.

A January 2015 article in Chromatography Today details how art conservationists and researchers use chromatography to better understand how a painting was made, the materials used and what restoration efforts have been tried in the past, if any. “Chromatography is the science of separation…”[i] and “is an ideal tool to aid researchers in their identification of the various components used in each of the layers.”[ii] They use the knowledge to make repairs and protect the paintings. The analysis is also used to determine if a painting is a fraud.

The last 15 years there has been a steady increase in bedbug reports. These nefarious blood-sucking creatures are attracted by body heat, smell and carbon dioxide, and of course, they get their name because of their preferred place of residence. The rise in the bedbug reports has been attributed to everything from increase in travel to insecticide resistance, so finding solutions to stop the trend is important. In fact, more than $500 million is spent every year in the United States to manage bedbugs.

Research published in the International Edition of Angewandte Chemie describes how scientists are using pheromones to attract bedbugs. Using gas chromatography, scientists from Simon Fraser University in British Columbia were able to identify pheromones that worked in lab settings. Unfortunately, after years of study, the findings did not prove effective in apartments infested with bed bugs. It wasn't until after scientist analyzed the bug feces that they were able to identify volatile compounds that appear to attract the bugs.[iii] The research from Simon Fraser is available online.

So, the next time you look at an historic painting or read a story about bed bugs, we hope you think about the art and science of gas chromatography and the role it plays in preserving the arts and ensuring you sleep without the creepy crawlies.