Go Ahead, Drink that Roundup 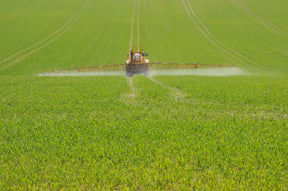 What would you do if someone gave you a glass of Roundup weed killer and said, “Go ahead, drink it?” If you are like most people, you might look around for the cameras to see who’s in on the practical joke and/or question the request and the person offering it to you. Recently, a proponent of genetically modified foods, went on French TV Canal+ to defend Monsanto, the manufacturer of Roundup and to downplay recent reports that glysophate, the active ingredient in the weed killer, is responsible for the growing rates of cancer in Argentina. Scientists in Argentina have detected it in the air, water and food, although the levels have been low.

The lobbyist denied the claim, saying, “You can drink a whole quart of it and it won’t hurt you.” The interviewer of course offered him a glass, which was subsequently refused with, “I’m not stupid,” and then he ended the interview.[i]

Glysophate has long been a target of environmentalists who warned of the potential hazards of the product while manufacturers point to validation that has taken place in over 160 countries for over 40 years. The use of the glysophate on agriculture has been growing with the emergence of genetically modified crops that are resistant to the herbicide. A recent Wall Street Journal story reported,

“Glyphosate is the most-used herbicide in the U.S., according to the Environmental Protection Agency. Farmers have ramped up its use over the past two decades with the advent of genetically modified crops, including corn and soybeans, which can withstand sprayings of the chemical. Herbicide-tolerant biotech plants were grown on 94% of U.S. soybean fields and 89% of U.S. corn fields last year, according to the U.S. Department of Agriculture.”[ii]

Last week, the World Health Organization released a statement that the herbicide likely has the potential to cause cancer in humans. The determination was based on an assessment completed by the International Agency for Research on Cancer. Shortly after WHO released its report, Monsanto demanded a retraction citing “decades of ongoing comprehensive safety reviews by the leading regulatory authorities around the world that have concluded that all labeled uses of glyphosate are safe for human health.”[iii]

According to the EPA fact sheet on the herbicide, acute exposures to glysophate can potentially cause the congestion of lungs and increased breathing rate. Chronic exposure has the potential to lead to kidney damage and reproductive challenges. Evidence of cancer is currently inadequate.[iv]

Even though the debate continues about the safety of the herbicide, drinking a quart Roundup is still not advised. A 1991 paper outlined 93 cases of Chinese who ingested Roundup. Seven of the 80 patients that ingested Roundup at its 41% concentration died while 66% had damage to their gastrointestinal tract and 43% suffered sore throats. The seven that died drank an average of 184 mililiters (or .7 cups).[v]

Glysophate as well as hundreds of pesticides can be tested using the Teledyne Tekmar’s Automate Q40.  For more information on the AutoMate-Q40 Automated QuEChERS Sample Prep System, visit our website  http://www.teledynetekmar.com/AutoMateQ40/ or click the button below